Technological advancements in hospitality distribution have brought on immense opportunities for both hoteliers and travel sellers, including online travel agencies, travel management companies, and the trusted travel agency community. But at the same time, the way that hospitality distribution has been evolving has hampered progress compared to similar industries. Two decades ago, only large hotel chains had access to the right technology, enabling connectivity between the hotel and the reseller. With the advent of the channel manager, independent hoteliers were able to much more effectively manage their distribution. While CRS-level connectivity technology, often called a switch, evolved to handle massive complexity and scale, channel managers tended to be nimbler. Simpler and standardized APIs allowed for quicker implementation, both on the side of hoteliers, as well as OTAs and other resellers. In other words, the barrier to entry for smaller hoteliers was lowered by channel managers, while switch technology was the clear choice for large brands and chains.

Over the last two decades, the two technologies have continued to evolve, each with its inherent strengths and challenges. This also meant each technology had its own place in the content sourcing strategy for OTAs and in the distribution strategy for large hotels. Smaller independent hoteliers have often been limited to channel managers, which works well for its intended purposes. For a large hotel chain, the switch has been great for connecting the hotel CRS to the GDS and to medium to large-sized OTAs. To connect to smaller regional OTAs and wholesalers, chain hotels often had to utilize a channel manager at property level via a PMS, which resulted in some loss of control at a hotel’s corporate level. With the growth in travel in emerging markets, such as India and China, this presented some challenges with regional OTAs serving those markets and driving significant traffic. Take China… in this market, Ctrip is by far the largest OTA serving that market and a clear choice for hoteliers wanting to attract Chinese travelers. While, Ctrip does cover 36.6% of the Chinese market, the savvy hotelier will ask “what about the other 63.4%?”. And, it’s a wise question to ask – since most distribution technology providers do connect with Ctrip, competition on the site is stiff. Smaller specialized OTAs, ecommerce platforms, and tech-savvy tour operators are on the rise, making China similar to many other travel markets in terms of travel seller composition. So, for those hotelier’s hungry to implement a uniquely crafted and differentiated distribution strategy - the menu is ever expanding. 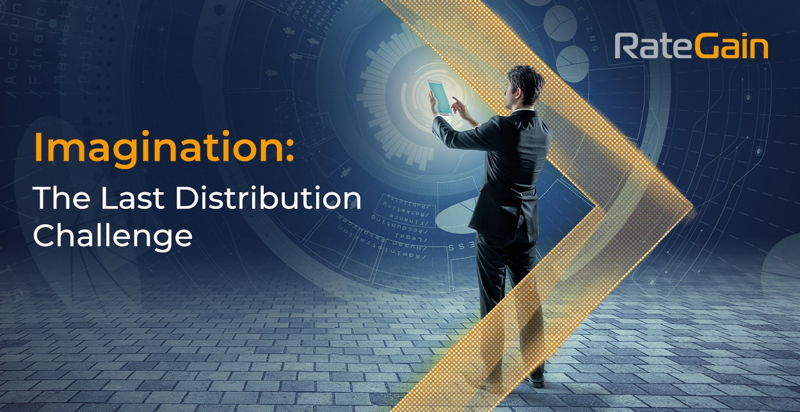 So, what is standing in the way of hoteliers getting creative with their distribution strategy or travel sellers setting themselves apart with a differentiated offering? Unfortunately, the same thing that has plagued the travel industry for decades – technology and connectivity. Similar to the rapid growth days of the internet, many hoteliers are still relying on faxing of reservations, as crazily archaic as that sounds. But more importantly, and unlike many technologies going back decades, there are different standards for connectivity, and different systems and end-points needed to connect, each having evolved independently of one another. I wish I could say that the only choice we struggle with was between a Apple or Android. And of course, there’s the choice between push (sometimes favored by OTAs) and pull (often favored by hoteliers) models of connectivity. While the industry has somewhat trended from pull to push in the past, it is now moving back towards a pull model of connectivity, driven by consumer expectations of personalization and the need to make personalized offers in real time.  Still, the push model is not going anywhere in the foreseeable future. Today, both push and pull require heavier infrastructure investments to support shopping and booking traffic, often reserved to larger systems and system providers. Independent hoteliers with a PMS and chain hoteliers with older CRS systems will continue to be constrained by the capacity of their systems. This will once again put most hoteliers at a disadvantage in their ability to deliver a personalized offer, similar to what consumers have come to expect in the Amazon-like world of today. It will at the same time drive OTAs increasingly to deliver a diverse offering to meet a complex set of consumer preferences.

An Explosion of Possibilities

A little over a year ago when we combined the forces of DHISCO and RateGain, we knew there was tremendous potential for synergies, but we weren’t quite clear on exactly how we would realize them. RateGain’s channel manager, RezGain, and DHISCO’s Switch had both different and leading distribution capabilities. RezGain is great at push, while DHISCO leads in pull. Each also came with rich existing businesses that had traditionally not intersected in the marketplace. On the supply side, DHISCO served every large hotel chain in North America and Europe, along with many with presence outside these regions. Through RezGain, RateGain served thousands of medium-sized, independent hotels across Asia. On the supply side DHISCO is the obvious choice for indirect GDS connectivity, while RezGain has the industry’s largest OTA and wholesale connectivity network. For anyone with a basic knowledge of hospitality distribution, the initial opportunities began to materialize, while the theoretical possibilities were mesmerizing. The below diagram shows how a simple Push and shop to Push is done.

After some months of frantic whiteboarding and around the clock engineering, we have now unlocked the closest thing to limitless distribution that the hospitality industry has seen. Allowing Push and Pull models of distribution to remain a barrier to connection between supply and demand is outdated. This means that customers now have access to virtually any type of connection between hotel and reseller. Where one partner may have preferred to connect in a specific way, often times the desired connectivity partner had no ability to support that. We have removed those barriers by bringing together the RezGain and DHISCO specialties.  We are, proverbially, putting connectivity square pegs into round holes. The below diagram shows how a seamless Push and shop to Push is done and how it is done with ResNotif.

I liken RateGain’s advancement in distribution technology to recent developments in voice-enabled translation technology. Just like we can now travel the world and make new connections with people in remote parts of the world without letting language be a barrier, travel sellers and accommodation providers can now connect anywhere in any way. I love the possibilities.