The Best States to Work in Hospitality

New research has revealed the best states to work in hospitality, with Wyoming coming out on top.

New research has revealed the best states to work in hospitality, with Wyoming coming out on top.

The study by hotel software company HotelTechReport analyzed official data from the US Bureau of Labor Statistics on employment, salaries, and vacancies in all hospitality jobs across the 50 states to see which state was best for working in hospitality.

It found that Wyoming was the best state to work in hospitality, offering a good average hospitality salary of $37,530, with only 35% of it going towards rent. There’s a good portion of hospitality jobs with 3,239 employees in the industry per 100,000 jobs, and a decent number of vacancies with 161 per 100,000 people. Combining all these factors gives the state a score of 79.32 out of 100 on the hospitality job index – the highest out of all 50 states. The Mountain West state is home to Yellowstone National Park, with visitation numbers reaching nearly five million in 2021.

Nevada takes second place on the list, offering many existing jobs, with 3,992 of every 100,000 jobs in the state being in hospitality. A high portion of salary goes towards rent in the state with an average yearly rent of $25,800 and an average salary of $37,554. However, the high number of vacancies with 233 hospitality openings per 100,000 people meant it scored a high 78.58 out of 100 on the hospitality job index. Nevada is home to one of America’s most popular tourist hotspots, Las Vegas, which saw 32.2 million tourists visit in 2021.

Coming in third place is North Dakota, which receives a score of 73.49 out of 100 on the hospitality job index. It had the lowest amount of a hospitality salary going towards rent out of the top ten with just 25%. This is due to the average rent in the state sitting at just $9,972 a year which is a quarter of the average hospitality salary in the state of $39,652. Additionally, it also came in with a good amount of vacancies, with 199 per 100,000 people in the industry and 2,335 employees for every 100,000 jobs in the state. 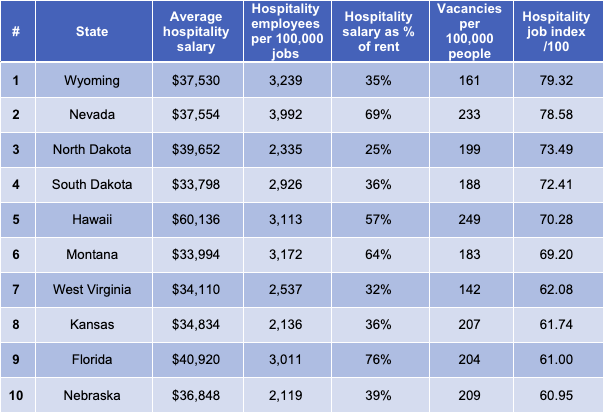 South Dakota comes in fourth place thanks to a score of 72.41 on the hospitality job index, with a similar balance in statistics to North Dakota. It has a low percentage of the average hospitality salary going towards rent, in addition to 2,926 people employed in hospitality per 100,000 jobs and 188 vacancies in the industry per 100,000 people.

Rounding out the top five is Hawaii, with The Aloha State boasting the highest average hospitality salary of any state in the top ten, in addition to a high amount of existing employees in the sector with 3,113 per 100,000 jobs. It also has the highest amount of hospitality vacancies per 100,000 people, with 249, giving it a score of 70.28 on the hospitality job index.

Commenting on the findings, a spokesperson from HotelTechReport said: “This data highlights not only where the hospitality sector is booming, but also where those working in it can live comfortably in terms of financial stability. Additionally, the statistics of states with tourist hotspots like Yellowstone in Wyoming or the Las Vegas Strip in Nevada show tourism’s effects on the industry itself.”

This study was conducted by HotelTechReport, a site that allows users to review, compare and evaluate top hotel management software providers.

From each state, salary and employment data was collected on the following occupations from the Bureau of Labor Statistics:

Average rent data by state data was collected from Zillow

HotelTechReport.com is a next gen B2B media platform that helps hotel owners and operators from the world's leading hotel companies find the best digital products to grow their businesses. Each month 200,000+ hoteliers across 120+ countries research and discover new ways to leverage technology to drive revenue, increase operational efficiency and improve the guest experience.

We have received your request to claim “The Best States to Work in Hospitality” and will reach out within 72-hours once you have been verified as the author and the article has been update with author citations and information.