There’s no question that the coronavirus has deeply impacted the tourism industry. As the pandemic continues to evolve, however, what’s difficult to discern is the breadth and depth of its impact in both the short and long term.

We’re still facing the repercussions of intermittent lockdowns, border closings, and economic stress, but these 50 statistics show the initial and ongoing impact of coronavirus on the tourism industry. We’ve broken these data points out into the following areas:

The impact of the coronavirus pandemic on global travel is not black and white.  Some tourism business' like smaller California wine country hotels and hotels adjacent to national parks have achieved record numbers despite a near complete shutdown of inbound tourism and international travel.  Domestic tourism has been far from safe in the global pandemic with economic development initiatives supporting hotels, tour operators and other travel companies support their workers via aid programs like America's PPP (paycheck protection program).  Global tourism will rebound from this the same way it did from the 9/11 terrorist attacks but experts uninanimously agree that it will take longer.  The hotel industry has been devastated by low levels of international visitors as tourism demand dropped to all time lows with tourism destinations even turning potential travelers away.

Read on for some of the most remarkable numbers showing the widespread impact of COVID-19.

Global Impact: 2020 and Beyond

The tourism industry worldwide is impacted by coronavirus – so much so that global GDP is expected to shrink dramatically and unemployment to skyrocket. Here are a few stats that show how tourism worldwide has been decimated.

2. European tourism is expected to take the biggest hit from COVID-19: revenue for the travel and tourism industry in Europe will decrease from $211.97 billion in 2019 to roughly $124 billion in 2020.

3. The tourism industry lost 1.5% of global gross domestic product after four months of being shut down, reported the UN Conference on Trade and Development.

4. If international tourism remains shut down over 12 months, the UN predicts a loss of 4.2% global GDP ($3.3 trillion).

5. The World Travel and Tourism Council predicts that 121 million of the 330 million jobs tied to tourism around the world will be lost in 2020.

6. Tourism is going to take a while to recover, says McKinsey. The consulting firm predicts that international tourist arrivals will decrease 60 - 80% in 2020, and tourism spending is not likely to return to pre-crisis levels until 2024.

7. Not only are consumers traveling less, but they’re also dining out less. Statista reports that the “year-over-year decline of seated diners in restaurants worldwide was a staggering 41.36% on August 23, 2020.”

Tourism in the US

In the US, the economic effects of a slowdown in tourism are expected to be on par with many so-called “developing countries.” In addition, the impact of a decline in tourism will have wide-reaching effects on many other parts of the economy.

8. The travel industry says it accounts for 15.8 million American jobs—that’s employment for one in every 10 Americans. That means the economic impact of coronavirus could have a major impact on the US unemployment rate.

9. Some reports predicted that the loss in travel-related jobs caused the U.S. unemployment rate to double from 3.5% in February to 7.1% in March/April.

10. Based on current trends, experts predict that the United States will lose far more than any other country in dollar terms and nearly double that of China.

11. In April, when many states encouraged or mandated that residents stay home, tourist arrivals in Hawaii fell 99.5%. Tourism accounts for 21% of Hawaii’s economy.

12. Florida also faced a drop in tourism, with their tourism sector declining 10.7% in the first quarter of 2020. The state reports that tourism has an economic impact of $67 billion on Florida's economy

Consumers are not interested in boarding an airplane anytime soon, due partially to border closures as well as safety concerns and high ticket prices. Air travel is predicted to be depressed for a long time.

15. Travel restrictions at borders impacted air travel and other forms of transportation. There were four categories of restrictions impacting a total of 217 destinations: 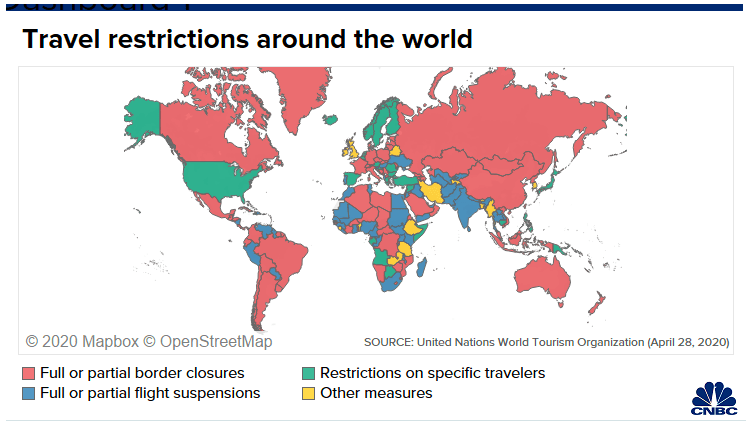 21. Despite many governments providing aid to the airline industry, passenger revenue is estimated to drop by $314 billion in 2020 — a 55% decrease from 2019, according to the International Air Transport Association.

22. As of May 4, 2020, international flights had decreased by 80% as compared to 2019. Many airports were closed and flights banned due to border closings.

23. IATA, the International Air Transport Association, reported in June, 2020 that coronavirus would account for a net loss of $84.3 billion for all airlines, worse than the $30 billion loss in 2008. Income is projected to remain negative through 2021. 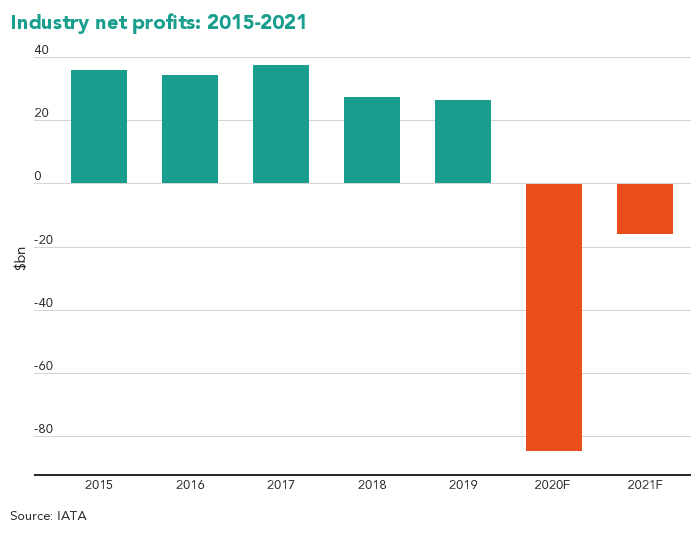 24. IATA also predicts that plane ticket prices will increase, especially if airlines are mandated to comply with social distancing measures. Ticket prices may rise by as much as 50%, according to Alexandre de Juniac, the head of IATA.

25. One company tracking ticket prices during the height of COVID-19 found that fares through April 13 and May 4 rose 13.7% and 10.9% year over year, respectively.

Travelers are unlikely to feel comfortable staying at hotels in the near future, meaning low-occupancy rates will impact the hospitality industry for years to come.

27. In the US, AHLA found that individual hotels and major operators are projecting occupancies below 20%. For many occupancies, a rate of 35% or lower makes it impossible to stay open  – and many accommodations are closing altogether. 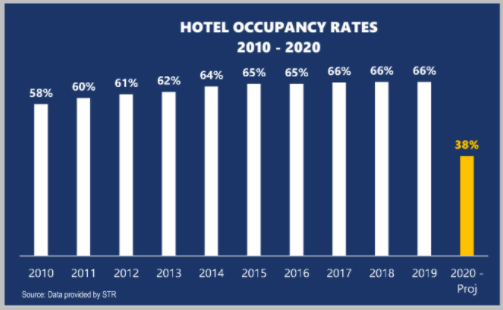 28. McKinsey predicts that COVID-19 is likely to accelerate the shift to digital. Travelers will be looking for flexibility and be willing to make last-minute bookings as the situation evolves. Case-in-point: more than 90% of recent trips in China were booked within seven days of the trip itself.

29. The consulting firm also ran a few different scenarios to see how hotel RevPAR would be impacted:

31. RevPAR of luxury rooms is the slowest to recover due to their higher variable and semi-fixed costs. 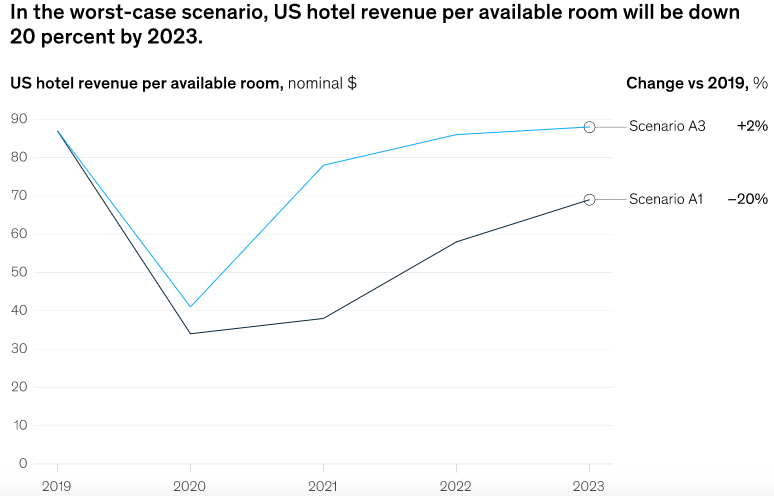 32. A July 2020 Ipsos survey found that 51% of Americans are willing to stay at a hotel, the same percentage as the month before. Attitudes toward frequenting hotels seem to be improving or staying the same.

33. US travelers have certain expectations of the tourism industry. The Tourism Crisis Management Initiative at the University of Florida found that airports, accomodations, and attractions must take the following initiatives to communicate safety protocols: 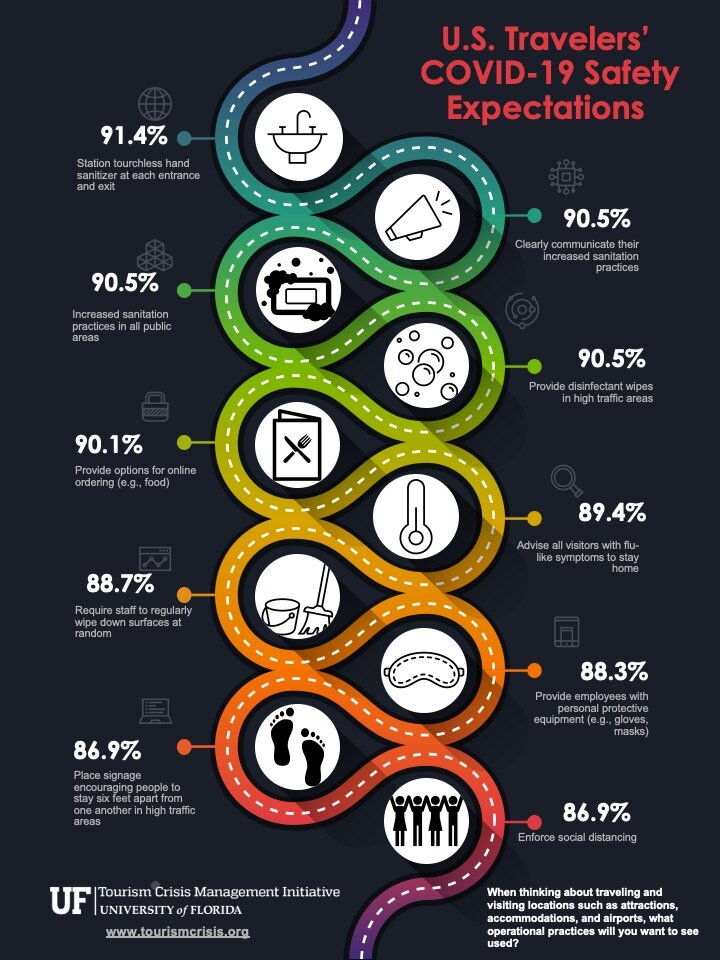 34. Airbnb is not faring any better than traditional accommodation options. The platform, which relies on hosts, have seen 64% of guests cancelling or planning to cancel their bookings since the pandemic began. In addition:

37. Hosts anticipate a 44% decrease in revenue for June through August

Many restaurants and bars all over the world have had to close due to coronavirus and social distancing measures.

40. In the US, full-service restaurant reservations dropped starting in March – visits were down by 41% across the country. 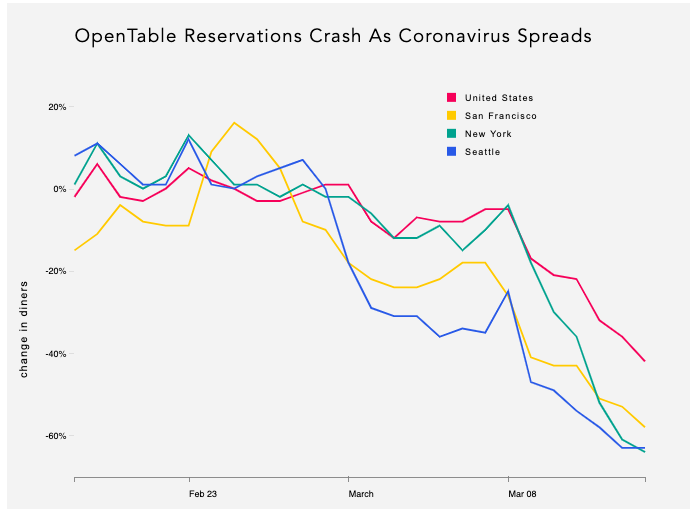 42. Restaurant workers have been hit hard by the pandemic. The National Restaurant Association reports that two out of three restaurant employees have lost their jobs.

43. Industry advocacy group James Beard Foundation found that restaurants, on average, laid off 91% of their hourly workforce and 70% of salaried employees due to COVID-19 and closures resulting from the pandemic.

44. The National Restaurant Association expects that the dining industry will lose up to $240 billion by the end of 2020.

45. What will it take for restaurants to reopen? A lot, according to the James Beard Foundation. Restaurant owners report that these are the biggest obstacles to reopening again successfully: 41% say the slow return of customers, 35% say they need cash to pay vendors, 16% would need to rehire staff, 3% would need to retrain staff, 2% are worried about health inspections.

46. In-person dining may be off limits, but in one survey, 33% of consumers said they’re getting more takeout than before the pandemic.

Historic sites, theme parks, cruises and museums were shut down for the majority of this year. Here’s how the tour and attraction sector fared during COVID-19.

47. UNESCO reported on International Museum Day that nearly 90% of cultural institutions had to close their doors during the pandemic; almost 13% may never reopen.

48. The New York Metropolitan Opera had to cancel its season by the end of March, and expects to lose $60 million in revenue.

49. Safari bookings, according to one survey, are down by 75% or more, jeopardizing the tourism industry in countries that need internationla visitors badly to support their economy.

51. The CDC issued a no-sail order for cruise ships, finding in their study that 80% of ships within U.S. jurisdiction had cases of COVID-19 on board during March - July.

53. In March, 77% of members of the American Society of Travel Advisors (ASTA), an organization for travel agencies, predicted they would be out of business in six months or less.

54. The Walt Disney Co. lost nearly $5 billion in April, May and June, due to its theme parks being closed: Disney World, Disneyland, Disneyland Paris, plus the brand’s resorts and cruise operations

55. The pandemic has deeply impacted business travel: this sector is predicted to lose $810.7 billion in revenue this year.

57. Experts are predicting that 5 - 10% of business travel will be permanently lost, due in part to remote working tools that enable virtual meetings.

58. Business travel declined 89% as a result of COVID-19, more than the Great Recession and 9/11 losses combined. PwC reports that almost half of all businesses canceled corporate travel during this pandemic. 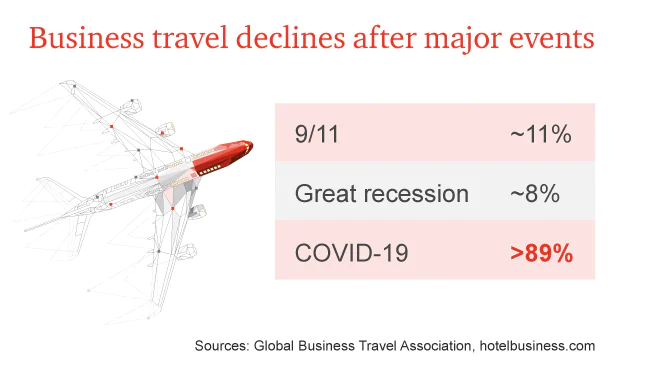 We have received your request to claim “58 Tourism Industry Statistics Showing COVID-19's Impact” and will reach out within 72-hours once you have been verified as the author and the article has been update with author citations and information.