How to Think About Automation's Impact on Hospitality

Automation is everywhere: you've probably seen it on marketing brochures and been pitched on it by eager sales reps. And, if you're like other professionals that spend 40% of their time on administrative tasks, you recognize the value of having more time to grow the business rather than run the business.

Even so, it's easy to get carried away with buzzy trends like automation, chatbots and artificial intelligence. We start automating things simply for automation’s sake -- or because we think we should or have been told by others that we should.

Instead, we really should step back to think carefully about what should be automated and what shouldn't. Then, we can analyze the utility, probability and time it takes to automate those tasks. It’s surprising to find that sometimes it’s more costly and inefficient to automate than to simply do the task manually! Other times, we’re amazed at how long it took us to automate a tedious task!

To deepen your understanding on making automation work for your hotel, here's how to think about automation and its impact on hospitality. From here on out, you'll know exactly when and where automation makes sense for your hotel --  and when it's just useless marketing fluff.

In its broadest sense, automation performs tasks that used to be done by people. However, as artificial intelligence technology advances, automation also refers to autonomous decision-making to do things that humans were never able to, such as analyzing massive data sets and continuously improving forecasts, recommendations, and actions.

Types of Work: Routine vs. Non-routine & Cognitive vs. Manual

1. Examples of routine tasks in hospitality:

Personalizing a welcome basket for a VIP

Site selection for a new hotel

Designing a table plan for a wedding

Due to the unique nature of non-routine tasks, they are less likely to be automated than routine tasks. Although this is changing quickly. As automation reaches further into the workplace and artificial intelligence becomes more sophisticated, even non-routine tasks are increasingly automated.

3. Cognitive tasks in hospitality include:

4. Examples of manual tasks in hospitality:

So which of these two types of tasks are more likely to be automated? In this case, cognitive tasks are much easier to automate than manual ones. That's because the manual tasks require an intimate understanding of physical space, with each task requiring a specific set of actions that are hard to replicate with a single machine.

Also, manual tasks usually require hardware to automate whereas many cognitive tasks can be automated with software. For example, it's incredibly difficult to train a robot to change sheets --  although it's much more realistic to use a robot for a manual task with easily defined parameters, such as vacuuming the carpet.

Trends in Types of Work

The Industrial Revolution was built on routine tasks, with each worker designated to complete a single task, over and over again. Many of those jobs were eventually taken over by robots programmed to accomplish a single task at speeds and precision far beyond a human's ability.

Alongside the drastic reduction in factory workers, “nonroutine cognitive” jobs became the dominant type of work. At the same time, there was a steady rise in non-routine manual work, or jobs that were physical but not repetitive. In essence, automation has dramatically reduced the number of routine jobs, leaving mostly mindless jobs that pay little and intellectually-intense jobs that pay a lot.

Why does this matter? For one, the future of work has a big impact on how hotels will operate in the future. It's also about setting the scene for the transformative impact that AI-driven automation will have on the remaining two types of work: the non-routine cognitive and non-routine manual. As computers surpass humans in capabilities, even those tasks are at risk of automation. 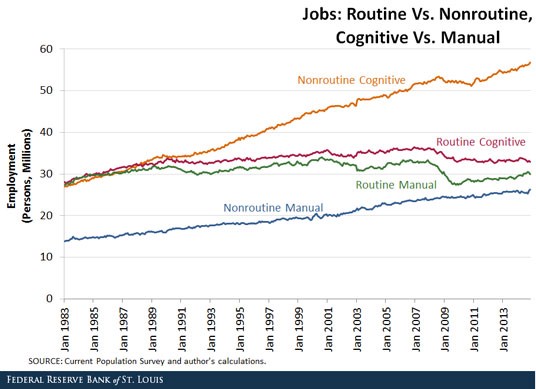 Artificial intelligence is the final frontier of work. We’re training machines to do all of the types of work humans have traditionally done, which means that we will soon see machines doing both the non-routine cognitive and the non-routine manual work. These machines will be driven by what's called deep neural networks, which are basically virtual brains that give machines the ability to learn on their own, without training from humans. They just constantly learn and continuously improve...and yes, that means eventually becoming smarter than humans!

Case in point: A computer overcame the consensus view that it would take 10 years to beat a human in Go, a famously complex game that's even harder than chess. There are so many different board positions in Go that Jeopardy champion Ken Jennings had to reach across parallel universes to explain the possibilities:

“There are about 10¹⁷⁰ board positions in Go, and only 10⁸⁰ atoms in the universe. That means that if there were as many parallel universes as there are atoms in our universe (!), then the total number of atoms in all those universes combined would be close to the possibilities on a single Go board.”

So how long did it take for the computer to defeat the human? Google's DeepMind artificial intelligence team built AlphaGo, which managed to defeat the world's best Go player, winning by 5 games to zero after a short period of training. The unexpected defeat marks the cusp of exponential technological change, where computers outpace humans in handling non-routing cognitive and manual work. 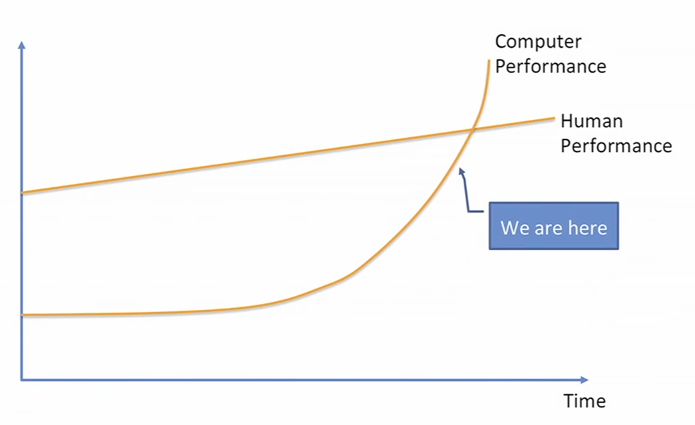 Work is changing far faster than many realize: over the next 20 years, nearly half of jobs in America could be automated. This will likely be accelerated by the intense pressures on hospitality during the Covid-19 crisis; as hotels either close temporarily or manage with barebones staff, automation becomes a critical survival tool. Doing more with less is essential in a downturn, as well as when business eventually begins to pick up but isn’t yet able to support full staffing levels.Hotels must begin to seriously leverage automation and understand where and how to use it effectively.

Automation is Key to a Thriving Hospitality Industry

The benefits of automation for hotels are many: increased productivity, lower costs, a better experience for both staff and guests, more accurate forecasts and more precise pricing decisions. Automation means hotels will run far leaner operations and do more with less. Here's how:

Automation, when thoughtfully applied to a hotel operation, can unlock more revenue, increase guest satisfaction, boost staff productivity and happiness, and generally make an operation run more smoothly and profitably. As you look ahead to the future of work, automation can keep your property competitive and able to respond to the dynamic needs of these quite turbulent times.