The Evolution of OTAs in the Hotel Industry

Frenemies. That pretty much sums up the relationship between travel industry suppliers and online travel agencies (OTAs). On one hand, the hotel booking sites like OTAs provide a steady source of hotel bookings that reliably puts heads in beds, all without that much effort on the part of suppliers. On the other, this “effortless demand” comes at a hefty cost: up to 30% commissions on each booking.  Take a quick read of any hotel management magazine or hospitality industry publication and you're likely to read about the direct booking wars.

That steep price can be either seen as a marketing cost (something hotels would spend regardless to generate demand) or a tax (something imposed unwillingly on hotels by a powerful intermediary). Whichever the perspective, the cold, hard truth is that commissions are often a hotel’s second largest expense after labor.  In fact, one of the core focuses in revenue management is decreasing reliance upon OTAs with smart pricing strategy.

It’s a complicated relationship, that’s for sure. While we can’t do justice to the complete history, deep divisions and ever-evolving regulatory environment, we’ve pulled together some of the most essential pieces for anyone looking to get a deeper understanding of the OTA/supplier relationship.

We’ll start at a higher-level, setting the scene with a brief history of OTAs, from creation to regulation and ongoing consolidation). Next, we’ll compare the benefits and the problems of the OTA model for hotels. Finally, we’ll look at how data-driven market intelligence software, such as Parity Insight and Rate Insight, have become a hotelier’s best weapon against the main problems that arise in the OTA model.

What are Considered Online Travel Agencies?

Before we dive into a brief history of OTAs, let's agree on a definition. An OTA is an acronym for Online Travel Agency and refers to a travel agency whose primary presence is on digital channels, such as a website, where consumers can research and book travel on their own without assistance from a traditional agent.  While OTAs are no longer considered new technology, they are a huge driver of hotel rooms sales and online bookings in the hotel industry.  While large hotel groups like Hilton have managed to lower reliance on these distribution parties, many independent hotels rely entirely on OTAs to drive their bookings without even having a booking engine of their own.  The business model for OTAs ranges up to a 25% commission for some of the smallest properties.

A Brief History of OTAs: A Boom, a Bust, and Relentless Consolidation

Prior to the internet, booking travel involved a phone call or an in-person visit to a travel agent at a retail shop or a reservations agent at an airport counter. It was only once the internet started gaining steam that consumers were able to begin searching and booking travel on their own.

As the internet expanded from something you did at work to something you did at home, there was an explosion in interest in the consumer internet through the latter half of the 1990s. The dot com bubble led to astronomical valuations, as investors threw money at anything with a “.com” in its name. This frenzy culminated in the dot.com crash in March 2000, which left dozens of companies bankrupt and broke. Investors lost their money and tech took a huge reputational hit. Travel also slowed, which resulted in a quiet period on the online travel front.

As the economy gained strength again, by 2002, there was another wave of transformation driven by companies that had survived the crash. These companies were not just leaner and meaner, and able to pick off weaker competitors, but were also benefiting from the increasing speed of Moore’s Law and increasing internet penetration in the home.

Bolstered eventually by the introduction of the iPhone in 2007, a period of rapid transformation ushered in an era of consolidation, which saw a dramatic increase in market concentration among just a few dominant players who used M&A to pursue growth in both supply and demand.

After all this consolidation, there are now just three major holding groups of OTAs and related travel sites (such as metasearch, rental cars, and restaurant reservations), controlling 95% of the market, and only one new major competitor:

Today, It’s increasingly difficult for new entrants to marshall enough resources to compete at scale. For context: Expedia and Booking spent over $10 billion in combined advertising dollars during 2018. OTAs remain dominant on both the demand side (due to deep-pocketed investments in digital advertising) and on the supply side (due to global footprints of local market managers), which makes for a nearly-impossible environment for upstarts -- and has brought the sector into intense regulatory scrutiny.

It began in the European Union, which began debating online privacy rights in 2012. The debate culminated in 2016, with the introduction of a privacy framework called the General Data Privacy Regulation (GDPR), which marked a shift in tone around how data is managed online.

Also in 2016, EU regulators recognized monopolistic tendencies of online platforms in a 2016 report entitled “Online Platforms in the Digital Single Market”. The report was based on conversations with participants across the sector, which highlighted the impenetrable competitive moat that the major companies have built over the years -- often with sometimes-shady behavior. This has resulted in a series of regulatory developments in the UK, as well as a prominent lawsuit and a nationwide consumer awareness campaign from the AHLA in the US. The era of increased awareness and regulatory momentum had begun in earnest. 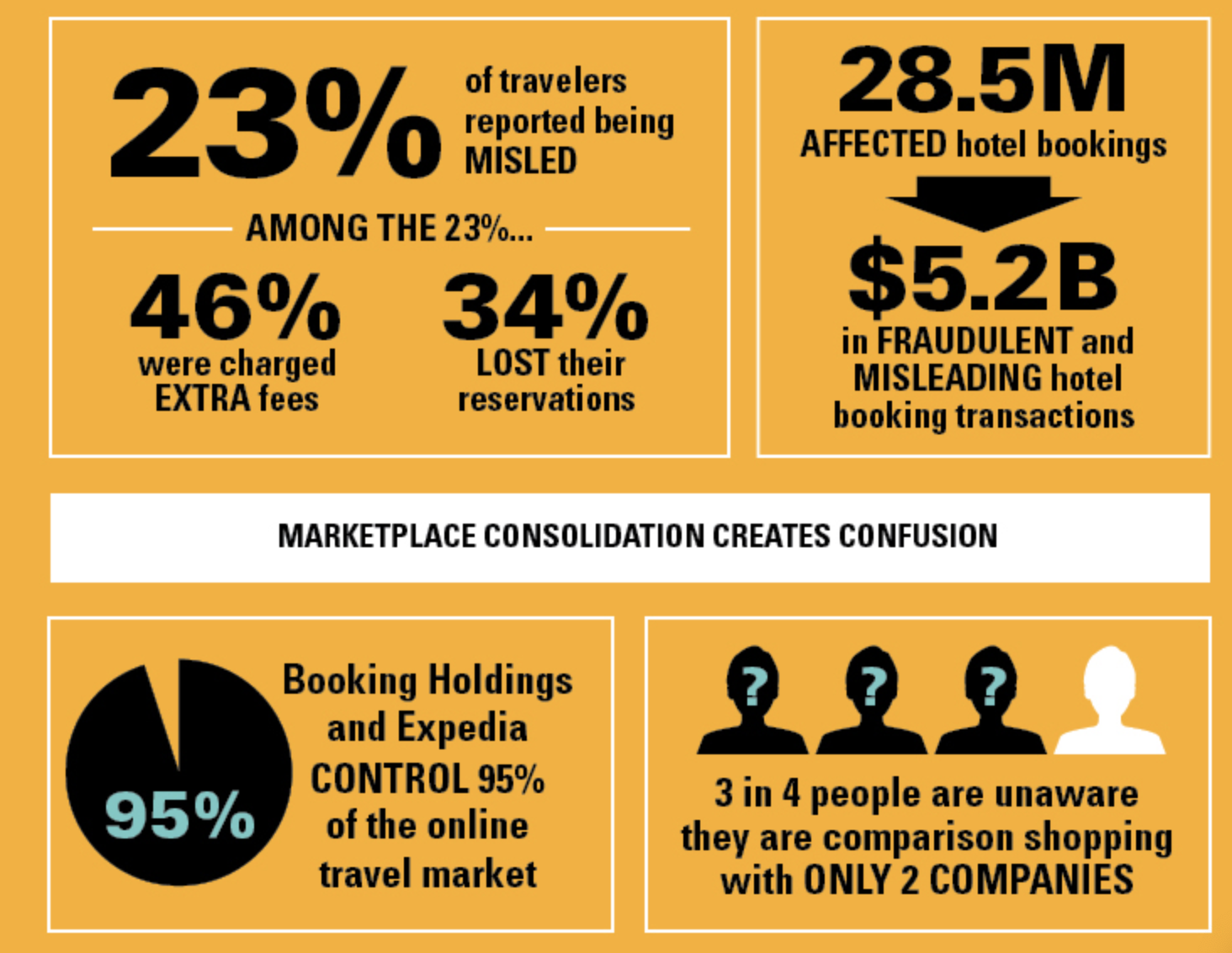 The AHLA’s Search Smarter campaign aimed at raising consumer awareness of the impacts of a duopoly.

What are the Benefits of OTAs to Consumers?

So why have OTAs managed to capture such a significant chunk of travel demand and place themselves between travelers and suppliers? And why do they continue to dominate? It really comes down to traveler preference, as seen through the lens of three core components:

In effect, OTAs put their customers at the center of their operations and relentlessly optimized the user experience in ways that hotels never did. OTAs gave customers what they want and completely leapfrogged hotels, who struggled to keep up with digital transformations such as ecommerce and mobile shopping. And, as long as OTAs excel at the digital user experience, hotels will remain at a disadvantage. 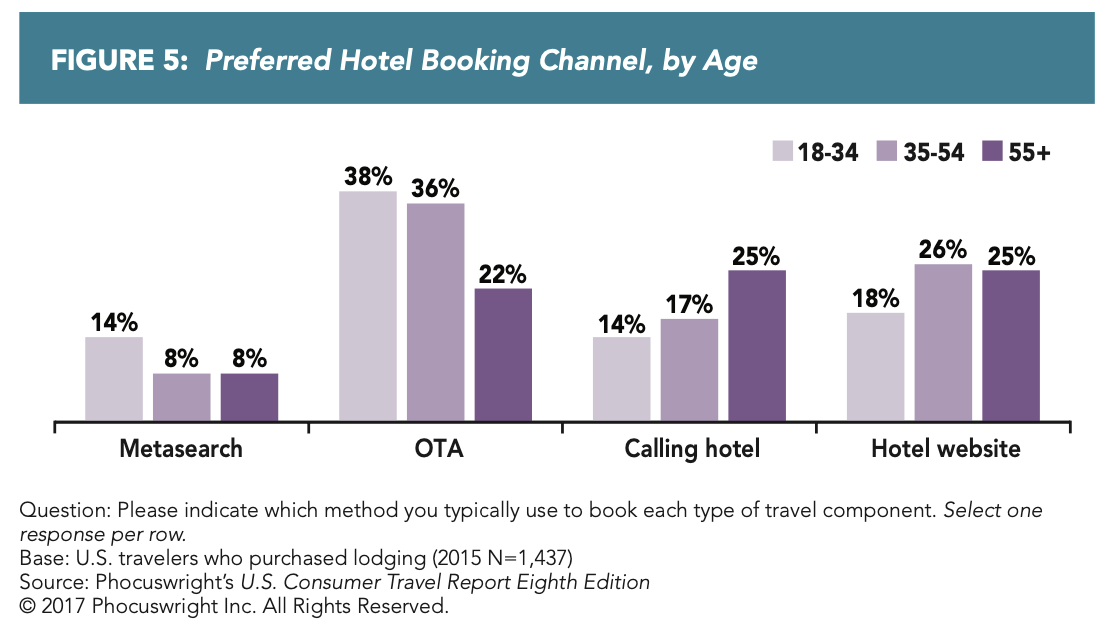 OTAs remain popular with travelers, as they are ideally positioned across many touchpoints throughout the customer journey.

What Are the Problems that OTAs Create for Hotels?

Of course, this position of power grates on suppliers. There’s a feeling of being squeezed for every last penny. As regulators consider how online platforms leverage their market concentrations, hoteliers have some very legitimate concerns, such as:

Overbookings and underbookings. Inventory must be updated individually on each channel’s extranet to avoid double bookings; without a channel manager, that can lead to overbookings. There’s a lot of overhead to manage these channels. And, since many OTAs have lenient cancellation policies, hotels face high cancellation rates which may depress revenue.

Commissions. Market concentration gives OTAs more pricing power, which has resulted in rising commissions. In fact, commissions have jumped 45% as a share of guest paid revenue since 2015 per Kalibri Labs data. Hotels are paying more for the same product -- especially concerning for smaller operations with less leverage. 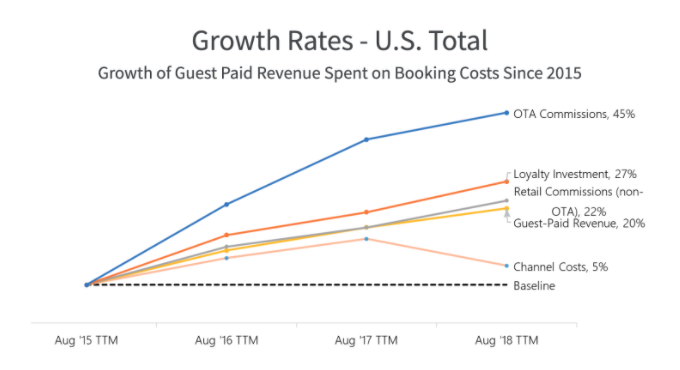 Incentive opacity. Lack of transparency as far as how commissions affect a property’s visibility, which isn’t made clear to consumers. “Higher visibility for higher commission” could be construed as a sponsored placement since one property pays to be listed before another of the same quality.

“After nearly two decades of operation under practices that arguably fall short in disclosure and objectivity, OTAs have created a false impression among many consumers that their listings are comprehensive and presented evenhandedly...Search bias is inherently deceptive and indeed intentionally deceptive.” -Impact of OTA Bias and Consolidation, 2017 research report

Breach of rate parity. OTAs want to turn lookers into bookers. It's how they get paid. That can lead to some perverse incentives, where channels reduce their commissions to offer a lower rate and US capture a booking that may have otherwise gone directly to a hotel. That, along with the complexity of managing many channels, leads to significant rate parity issues.

Lack of brand control. Hotels have very little control over how their properties are displayed on OTAs. They must comply with each platform’s specific standards. Also, different policies on each platform leads to customer confusion -- with hotel staff often bearing the brunt of that frustration.

Intermediation. OTAs insert themselves between the supplier and the guest, masking emails and sharing as little data as possible. This makes it harder for hotels to develop longer-term relationships with past guests. OTAs have a vested interest in preventing that, as they don’t want to lose their customers to a direct booking.

How Can Hotels Fight Back?

To address those challenges, hotels have some core technology on their side: parity management and rate intelligence. Since rate parity and rate shopping has a direct effect on profitability, these tools that have become a “must-have” for today’s hospitality tech stack, empowering hotels with 24/7 monitoring, automated alerts, and deep data analytics.

Rate parity tools monitor rates across all distribution channels and highlight any violations. Since each rate parity issue can result in selling inventory at suboptimal; rates, active monitoring can help you improve your hotel’s bottom-line profitability. Some tools, such as Parity+ from RateGain, suggest a parity action plan that outlines a clear process for regular monitoring and escalation of the most pressing parity issues. Once market managers know that a property is paying attention, it becomes a bit easier to get these issues solved without too much damage to the bottom line.

In addition to rate parity monitoring, managing the OTA relationships effectively requires analyzing rate competitiveness. Rate intelligence tools give hotels access to the type of deep data analytics that have allowed OTAs to maintain dominance over the years. With seamless data analysis, hotels can make smarter revenue and distribution decisions, all without having to invest more time in wading through spreadsheets.

For instance, Parity+ provides not just insights about a single property but also broader market- and regional-level analysis that can level up a hotel’s competitiveness. It manages to accomplish this rapid-fire analysis by building a foundation of data technology that prioritizes both speed and accuracy.

As Airbnb joins the ranks of global OTAs and rate parity is top-of-mind, hotels must use their tools to define (and maintain) the right mix of business. As your hotel develops its rate monitoring discipline, it will optimize both its rates and its channels for the ideal distribution mix. The right mix  boosts revenue not just by selling rooms at the best possible price but also by leveraging new channels and throttling back underperforming ones.

As industry analyst and Kalibri Labs co-founder Cindy Estis suggests, success lies in maintaining a profitable distribution strategy that dynamically adjusts on a channel-by-channel basis -- an ideal place for a technology assist:

“[OTAs] will do anything to be a part of the sales path. If you collaborate with them, you have to do it with your eyes open. The trick for each hotel and brand is to determine in each market what pipes are flowing and what’s available. It’s optimal to cherry-pick which bookings are available at the highest possible profit margin. That’s the challenge everyone has.”

Further reading: Google Hotels is the Elephant in the Room, Is it Good or Evil?